Playing By The Rules

Thanks to advancement in computers and video technology, surveillance has made substantial strides over the past few decades. With so-called unseen 'eyes in the sky' at their disposal, there are numerous anecdotes illustrating the next-generation technology surveillance investigators have at hand. The sophistication and optical clarity of today's devices is so impressive that an officer was able to help a dealer fill in his crossword, just by using hi-tech cameras. However, when you remove technology from the equation, the difference between a good and bad surveillance investigator seems to depend on the sheer skill of the agent. Jim Goding just so happens to be an authority in the field.

Goding’s career in the casino industry first began in the 1990s, when he was employed as a dealer. However, as he explains, his “tolerance for public contact is very low, especially with people who are at their worst: half (or more) drunk, tired, and losing money”. When the opportunity to become a surveillance investigator arose, Goding quickly took it up. Now, Goding teaches people “the basics of Surveillance operations” through his Casino Surveillance News courses. The course explains “how to observe and report effectively to preserve the company's assets and safeguard its liabilities”, before moving onto examining casino internal controls and how to prevent scams, then finally how to “prevent, and... detect illicit and (to be frank) stupid activities”. 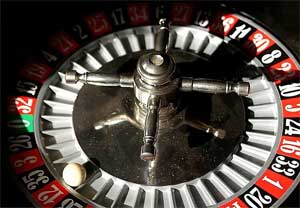 On a daily basis, depending upon the size of the casino operation, a surveillance investigator will deal with two to three tables games errors, or attempts to cheat or steal from the casino by either a dealer or a patron; again, it is a part of our job to determine whether it is in fact an error or an attempt at theft or cheating, and to attempt to recover any money lost, returning it to either a patron or the casino.

While the surveillance investigator is there to spot cheats and scams, they also have to factor in that sometimes, people make mistakes. As Goding explains, his job is to “ensure a completely fair gaming operation” and make sure that neither the casinos nor patrons are cheated.

We asked Goding about some of the recent Hollywood-depictions, such as those found in 21, of the face-offs between surveillance staff and card counters. However, the surveillance investigator explains that:

An individual card counter is really no threat to the bottom line of a casino. However, if it became obvious that the casino ignored these people, then the aggregate of all advantage players would become a threat. So the casino has to take them into account, and deal with them. Hopefully with a consistent policy in place.

According to Goding, "the greatest threat to a casino is always its own staff, from the front-line personnel in table games, cage and slots, right up to the executive level." Explaining the hierarchy of casino employees, Goding proposes that the "higher a person sits in the corporate chain of command, the more he can rip off from the organization”. Suggesting that while a dealer can only potentially "get away with (stealing) maybe a few tens of thousands of dollars...A department head or general manager...might be able to rip off the organization in different ways that become visible only after millions of dollars have been diverted from their correct destination." However, Goding makes clear that the same can be said "of ALL operations, from banks to retail stores to government."

While Goding refuses to reveal any of the high-profile cases he has worked on, he did share with us some of the cheating devices he’s come across or heard about after years in the field. According to the surveillance expert, "the most ridiculous of devices" he’s seen is the stringer:

(the stringer is) used on certain varieties of slot machines back in the nineties and earlier. It consisted of feeding a coin attached to a string, which either allowed you to use the same coin many times to gamble on the machine, or on some machines, to sweep coins into a discharge hopper. For a few bucks, the person using this device was risking, in Nevada, six years in the state pen for cheating.

Heavy Regulation For The Sake Of Safety

Given the history of some of Las Vegas casinos and their involvement with organised crime, the average player no doubt has some suspicions about the transparency and legality of gambling resorts. However, while the “potential of using the casino business to launder money, rip off the public, rip off its own stockholders and owners” is present, the industry is in fact heavily regulated. As Goding explains:

When considering crime in casinos, the common focus is on the Hollywood-influenced ideas of mobsters owning high-end gambling resorts. Yet, Goding suggests that one of the "major activities" of a surveillance investigator "is tracing theft from patrons". According to Goding, some casino goers "abandon their belongings, their money, and even walk away from slot machines with hundreds of dollars in credits still on the machines, trusting in the casino to safeguard their belongings and the money they leave hanging about." By taking responsibility for your personal belongings at a casino, not only can you ensure they’re properly safeguarded, but you’ll also be freeing up the time of surveillance investigators.

CasinoOnline.co.uk wishes to thank Jim Goding for participating in our interview.