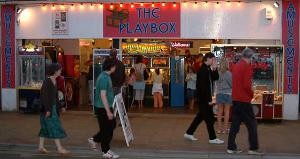 In the United States, much of the focus on antique arcade games has been shifted toward slots such as the Mills Golden Nugget – a slot machine which is now worth thousands of dollars. While the United States led the way when it came to slot machines (and still does), in the UK, up until the 1970’s pure-slots style machines were prohibited from arcades. Instead, operators had to provide “amusement” games which featured an element of skill, or did not offer a jackpot. This small piece of gambling legislation led to British game manufacturers creating some of the most unique games ever available in amusement arcades. That's precisely where the Playbox amusement arcade enters into the equation.

While vintage slots have proved a surprise hit online, beach promenades and town centres have also promoted yesteryear’s arcade games. There are a variety of amusement arcades, dotted along the coast of the UK and while each has its own style and theme, all conjure up the same “Aladdin’s Cave” feeling of both excitement and anticipation when visitors first begin playing the games on offer. Playbox specialises in vintage fruit machines and arcade games and first opened in 2003. As Huntley explains, the building was originally used as “a Victorian bathhouse where water was piped in from the sea”. Given the building’s rich history, it makes sense to hold some of the nation’s best loved games in such a grand venue.

A Trip Down Memory Lane

Playbox currently offers around 40 games, including player favourites such as Tip ‘Em Off, a 1968 release, which accurately represents the games of the era. Players feed coins into the machine and hope the shelves located in the game interface will tip in order to reward them with all of the coins located on each shelf. When asked about his own personal favourites, Huntley admits he favours games such as “Wheel of Fortune and Tooty Fruity”, which he remembers “playing at the local arcade.” Indeed, while Playbox centres its opening hours around the school holidays, the amusement arcade doesn’t just attract school children eager to while away the long summer days. As Huntley observes, many visitors to the Playbox “remember playing these (the games) on holiday when they were children”, noting that the simple gameplay of the amusements in Playbox often remind older visitors “of simpler times when things were less complicated”. The amusement arcade enthusiast also suggests that youngsters “love” to play Playbox’s games “while on holiday, as they are easier to understand” when compared with the “overcomplicated gameplay” style of today’s arcade games.

Given that the majority of Playbox’s games cost just 2p to play and the enjoyable atmosphere which the amusement arcade is able to create, it could be suggested that the amusement arcade offers more than just games. It also offers an enjoyable day out, where both adults and children can equally enjoy a range of fascinating vintage games. As Huntley is constantly adding to his roster of games (he’s already suggested that more games may appear in 2017), both new and returning visitors can expect a whole host of gaming treats when they visit the Playbox.

We would like to thank Stephen Huntley for participating in our interview. More details about the Playbox, including the current roster of games, opening times and directions are available by visiting http://www.swallowam.co.uk/iow.php . The images used in this article were kindly provided by Stephen Huntley.