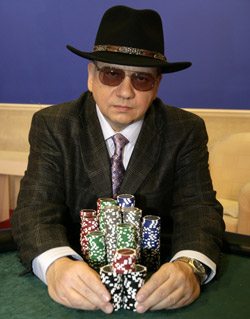 A Rocky Start To A Brilliant Career

Royer’s involvement in the gambling industry spans over 40 years beginning with an interest in old fashioned slot machines, such as the Liberty Bell and “Western movie” style pokies. In the 1970s, Royer began to take playing poker and blackjack “seriously” and a decade later, he began to learn and utilise card-counting techniques and strategies. Royer told us that, after practicing for a year, he headed for the bright lights of Vegas, eager to turn the strategies he’d practiced at home into a profitable venture. Here, Royer encountered his first challenge, the distractions of Sin City. Royer told us that on his first trip as an advantage player to a casino, he was:

Unprepared for the actual casino atmosphere and the challenges playing in a real casino, with real dealers, real pit bosses, real surveillance, other players, house players, shills, mechanics, and all of the other distractions and pitfalls of playing Blackjack in the real world

Undeterred by his first setback, Royer continued playing and changed his practice techniques to incorporate the hustle and bustle of Vegas. Royer’s determination to succeed meant he would often “turn on the television, the radio, play a record” in order to “provide distractions” and arm himself against the audio and visual assault that is a thriving Vegas casino. Royer’s practice paid off, as a few months later he managed to build up a bankroll of $64,000 and the rest (so to speak) is history.

Royer’s account of his beginnings in blackjack gives an indication of what drives the author to succeed. In the early 1990’s, casinos took a turn for the worse, as “corporate owners were trying to squeeze as much profit as they could out of everything, and they began to change the rules of blackjack, and dealing procedures, to a point where they nearly killed the game entirely”. It was around this time that Royer took up employment as a consultant for a casino in Reno. Royer’s job was to find out “what kind of exposure” the casino “would have to card counters, and specifically to card counting teams, in the event that they would descend upon their casino”.

Royer still acts as a consultant, but now advises equipment manufacturers and as an adviser has written over 100 reports regarding gaming operations. It wasn’t until the mid-1990’s that Royer turned his talent for casino games into an opportunity for others to learn, thus beginning a new chapter in his gambling career.

Getting It Down On Paper

As the author of 22 gambling related books, Royer admits that the jump from player to writer was, at times, exhausting. The 13 books which make up his Powerful Profits collection took five years to write and Royer spent around 14 hours a day, seven days a week working on them. However, once this labour of love was complete, the books offered something few other gambling experts have been able to accomplish, a complete repertoire of casino game guides, ranging from slots to blackjack and everything in between. While the books can be used individually, Royer notes that:

If you read all of them one after the other in the order in which they were written and published, a lot of the information will reveal the overall clarity of everything that was part of my life that I lived as I had written it in these books.

Royer’s impressive roster of gambling books could be considered off-putting to newcomers, eager to learn the basics of gambling, but don’t have to time to read 22 separate titles. While we believe that if you really wish to get to grips with gambling, Royer’s canon is essential. The author suggested that those looking for tips to apply immediately should read Powerful Profits From Slots. Royer notes that this book is perfect for three reasons:

First, 90% of all players of casino games play slots. Second, of those 86% have absolutely no clue on which are the better slots and which aren’t, and why. Third, in Chapter 10 of the book I explain what the RNG is, and the fact that it really isn’t anything that really exists, and what it really is and how it works, and why this is important.

Insight From Both Sides Of The Table

Royer’s position as a gambling expert is unique, as he’s one of the few casino consultants who has also authored books, giving him a birds eye view of the industry and games, which other authors lack. As Royer observes, he has had “access to the actual mathematics and the actual software engineers who wrote the programs that run these actual games”, noting that “if you really want to know” how to play slots, “that’s the book to read.” For those interested in online gambling, Royer has also written Powerful Profits from Internet Gambling and while online casinos have transformed dramatically over the past few years, Royer notes that the issues and advice the book offers is still valid today. Interestingly, Royer is also one of the most prominent casino experts who have spoken out about the Unlawful Internet Gambling Enforcement Act (UIGEA). In a blog post on GamingAuthor.com, Royer deftly analyses and criticises the legislation and, when speaking to CasinoOnline.co.uk, observed that the proposed law “was a disgusting chapter in the history of the United States, that a few highly prejudiced, self-righteous, self-serving hypocrites attached it to the important 2006 Port Security Bill”. Like other pro-online gaming advocates, Royer hopes Barney Frank will succeed in repealing the legislation, as it’s “already been too long for this (the UIGEA) to be in place”.

In 2010, Royer will be bringing out a new title on slots, which “will feature the latest, best, and the most player friendly casino slot machines available in the market”. When discussing the forthcoming title, Royer suggested it will act as a “guide that will allow them to look for these great slots in their favourite casinos and know immediately how to play them to their optimum potential, and player entertainment”. While Royer still plays at Las Vegas casinos, when we spoke to him it was clear he believed the glory days of Las Vegas had passed. Royer noted that “developers have destroyed all of the great and iconic Las Vegas casinos” and “replaced them with either incomplete broken down steel beam shells of ill-conceived casino projects that will now be rusting on the Las Vegas strip for the next five years or so, or overbuild gigantic high-rises with little or no value to what Las Vegas once used to be”. Royer’s comments seem particularly apt now, with cranes and half-completed buildings lurching over the Vegas Strip and on-hold until the economy picks up again. Royer suggests that the “the urbanization and Manhattanization of Las Vegas” is down to “Wall Street and corporate owners” who allow “accountants, lawyers, Harvard MBAs” to run their casinos. It’s the behaviour of these businessmen which Royer believes has meant that casinos now charge $600 a night for a room and have consequently forgotten about gamblers. However, these board room members are now going some way towards reparation, after realising that “that no one cares about pricey hotel rooms, $5,000 dinners...or $50 buffets, shopping malls, and the so-called ‘non-gaming experience’”, casino managers are beginning to put gambling back at the forefront of their operation.

The Future Of Gambling

Royer believes that Vegas casinos could return to complete profitability, provided they concentrate on one area they are sorely lacking, customer service. Royer notes that “for nearly a decade” he has “been trying to explain to those that own and operate the casinos in Las Vegas that their focus is erroneous, and that they are missing a great opportunity in being able to grab the economic recovery fully by the horns... by reinvesting in customer service and in catering to the gamblers”. Royer unfortunately suggested that a return to customer service is an idea which has fallen on “deaf ears... as the executives in the board rooms seem more interested in trying to play the stock market, and building multibillion dollar projects which they eventually cannot fund, rather than focus on the simplest of all things, customer service for the gamblers”. Forebodingly, Royer also observed that until casinos remember who their primary audience and consumers are revenue will be slow in Sin City. When asked whether Macau has now taken the title of “gambling capital of the world” from Vegas, Royer told us that “Macau is currently, and for the foreseeable future will be, the true gambling capital of the world”, due to Vegas’ mismanagement and consequent fall from grace.

Still, if you’re thinking of visiting Las Vegas and playing in a casino, Royer notes that “casinos like The Palms have the best paying slots, video poker, and video keno machines in the entire City of Las Vegas”. For poker players looking to play off the Strip, Royer also observes that “you can’t beat some of the local’s places like The Palms, Arizona Charlie’s, Station Casinos, M Resort, South Point, Coast Casinos, and several of the casinos in downtown Las Vegas”. Casinos such as the “Bellagio, Monte Carlo, Caesars Palace, Mirage, Flamingo, Bally’s, Paris, Mandalay Bay, Tropicana, Excalibur, and even Circus Circus” also offers what Royer calls “good blackjack games”. However, Royer warns that players looking to make a living from blackjack should be aware that it’s “a lot harder now than it used to be”. If you’re looking for more advice about Vegas casino play, you could also read one of Royer’s books, which “show the payoffs, the percentages, the volatility, and how to find out which are the better games”. You can find out more about Royer’s titles by checking out our book reviews section, which features a review of the author’s glossary guide, Casino Gamble Talk.

CasinoOnline.co.uk would like to thank Victor Royer for participating in the interview. You can find out more about the author by visiting www.GamingAuthor.com. UK gambling fans can order or download Royer's books from amazon.co.uk and other popular shops.